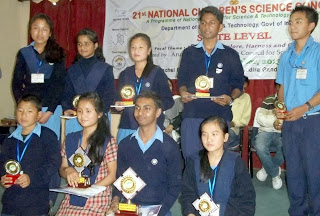 The top 10 projects  were selected for participation and representing Arunachal Pradesh in the “21st National Children Science Congress 2013” to be held at Vigyan Bhawan, Bhopal, Madhya Pradesh from December 27 to 31, 2013 . The projects were evaluated by a panel of evaluators comprising faculties from Department of Physics and Mechanical Engineering, NERIST, Naharlagun, and scientist of State Remote Sensing Application Centre.
Posted by VKV AP Trust at 22:56